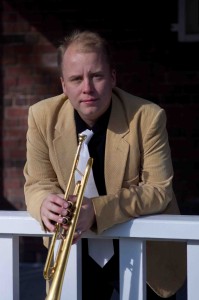 With these words in November of 2015 I made the decision to leave a corporate job that paid fairly well and was somewhat satisfactory in the passion department to go back into a world that I care about, makes me happy, love, and am passionate for, music!

To provide some context into who I am, music has always been part of my journey since moving from Germany to Canada at the age of 12 back when the Blue Jays last won the World series, 1993. My English was rather limited if none existent. I was certainly not able to communicate to peers at the new school that I was attending. One morning, a marching band gave a presentation at my school, which I thought I should join so that I can at least have something to do. This was an introduction into the world of trumpet, an instrument that has been part of me ever since. I was lucky to have attended a high school with a rich music program, providing me with life long learnings, which I am just realizing now. Skills like team work and leadership come to mind.Of course there was the music aspect. We attended a lot of competitions, in fact I was part of a student run organization that put on the regional Music Fest in 1998. As part of the music council, serving as president for two years, we put together trips to California and Florida to name a few.

After high school I attended a community college and studied Civil Engineering Technology. This was in part due to the social pressure and stereotype of music not being a future. Of course at this stage of my life any potential future was measured by earning potential, something that I have learned is not the only life ruler to be measured by. After two years of attending classes which I wasn’t really passionate about and still doing gigs in Kingston, I decided to follow my heart and moved to Toronto to attend Humber College. While attending Humber I always had part time jobs, usually 2 or 3. I also wanted to be active in the music scene outside of Humber, something that I encourage anyone attending a music school to do. I had some great playing opportunities including touring with a circus band one summer and playing with Dan Aykroyd. Still, the attractiveness of a steady paycheque kept me partially in the 9 to 5 world and partially in the music world. This, as anything does, has its pros and cons. I typically never worried about cash flow. Every two weeks I got an adequate paycheque that covered my lifestyle at the time. However, I never had enough time or energy to focus on practicing the Trumpet. Any trumpet player will tell you that if you don’t practice, the trumpet will not be too kind to you. Still, I always managed to find gigs here and there and have reasons to keep my chops in shape enough to play these gigs at a reasonable level.

The struggle of these two worlds has always been in my life and I didn’t mind this, until a year and a half ago, when there was a change in leadership at “the day job”. This new person was extremely corporate minded, to the point where I was expected to sacrifice time with my wife and son as well as music. “Maybe you should do music and I should find a new manager” were the words that made me realize I am at a fork in the road. To the left was a job that paid well and had all the promise in the world to be lucrative if I was willing to give up time with family and music. To the right was music and the ability to spend time with my family. I spoke to my wife who is the most supporting person in my life and we decided that music was the road we needed to travel on at this point in our life. With this, I handed in my two-week notice and started making plans to focus on my music career.

The purpose of the blog is to tell my story and discuss the transition from corporate to music life, merging the business learnings I have gained and transposing them to music.

Thank you for reading my blog. Over the next coming weeks I will be discussing my approach to music life, both on and off the horn.